Have you recently sent an E-Mail and when the recipient responds, it is clear that they only read the first couple of lines of the message?   Perhaps you wondered why your entire message was not carefully pondered by the recipient with the same diligence and attention to detail as when you wrote it.

We all know the reasons why this happens; everyone receives too many messages. Whether they are text, E-Mail, or any of the other myriad messaging platforms, it has become nearly impossible to keep up with the constant flow of information that demands our attention.

When the boss sends a message, it gets placed at the top of the priority list.  However, when a colleague sends a message, many times, people just perform a quick scan of the information to understand the general idea of the message, but some of the finer details are ignored.

Let’s face it; many of us need a really good editor when we write. This is true for our formal business communications as well as our casual messages to our friends.  In fact, many of us are so busy that we do not even have the time to proofread our messages before we send them, which accounts for all the amusing and nearly infinite auto-correct “fails” that have entire sites devoted to them.

Since the early days of E-Mail, many articles have been written that address E-Mail etiquette with the hopes of making our writing more direct and concise.  Back when E-Mail was young and the internet was not nearly as cluttered as it is now with all the rapid-fire communication tools at our fingertips, we had plenty of time for these nice rules of etiquette.  However, the digital communication world is radically different than it was a few years ago.

While we could blame the recipient for not reading our entire message, that will achieve little. What we should do is look at our own writing style to find a better way to communicate the key idea, while separating the details for those who require that information.

Here is a radical idea – have you considered footnotes?  It sounds ridiculous at first, but if you think about it, it may be the answer you are looking for to convey your main points while separating the details for those who are required to know more.

Here is an example:  A friend of mine recently asked if she should add an SSL Certificate to her site.  As I started to respond, I realized that she initially only wanted a yes or no response.

Of course, I wanted to give her some of the details, so they were included in the message.  As I proofread the message, I realized that there must be a better way to separate the important information from the details that may come into play later.

Here is what I came up with 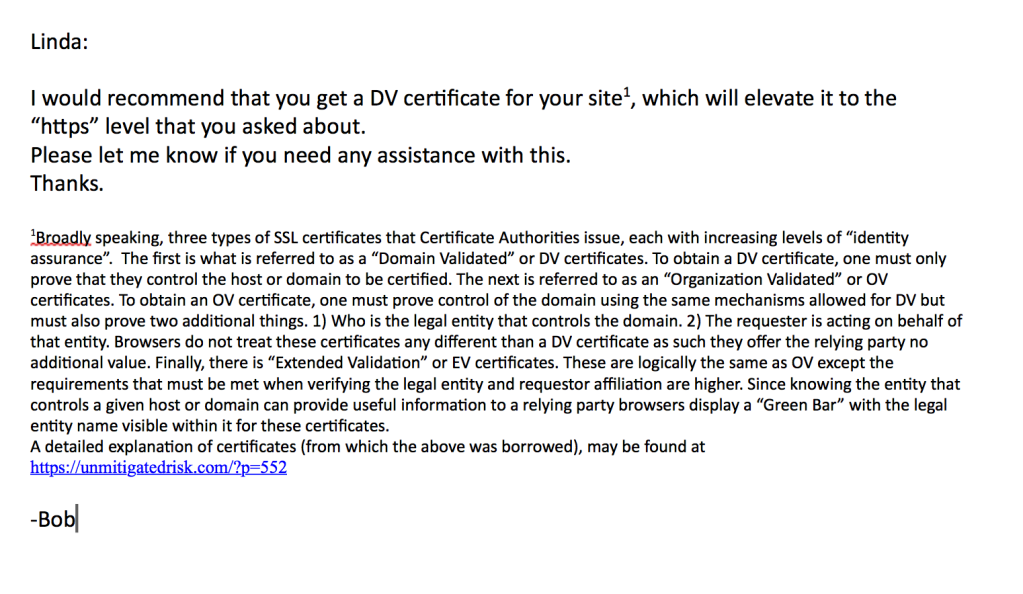 This worked out perfectly, as it conveyed the important information, while clearly separating the details in such a way that the recipient can make a mental note that there is more information without the stress of seeing a long E-Mail.  The recipient can also skim the footnote, as a deeper read is not initially required.

Of course, if you find yourself adding more than one or two of these in a single E-mail, then a more formal document attachment would probably be more sensible.   This could force us all to slow down a bit and write more coherent messages with better content and better organization.

Is this footnoted E-Mail really a crazy idea?  Remember that the “emoticon” was proposed in 1982, and I have some friends who seem to communicate only if they include numerous emoticons.   In 2006, the SarcMark  was born, and although it has not reached the rapid adoption one would have hoped for, it is a wonderful idea.

This E-Mail footnote idea may not be so crazy after all!